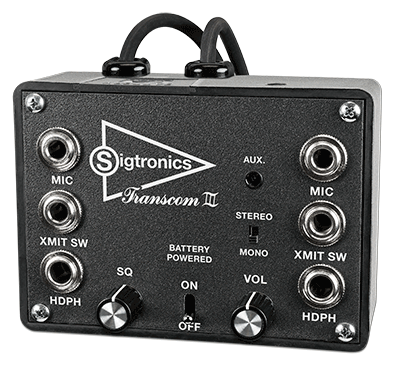 The Transcom III intercoms provide the ability to make and receive cell phone calls through the intercom. Use stereo or monaural aviation headset to listen to music and still have the capability to communicate with air traffic control.

Two Place to Six Place
The Transcom III is available in two, four, and six place versions. The four and six place models have remote expansion modules (accommodating two passengers each), which are connected to the main unit by a 4 foot cable. This allows the backseat passengers to have their own units and connection points, and helps keep cord entanglements to a minimum. And for the times you need only two positions, leave the expansion modules at home. The main intercom unit will work by itself.

Cell Phone / Music Input
Input from a portable stereo music source or a cell phone for music and phone calls. The included cell phone/music input cable can be used for either purpose. Just plug one end into your device and the other into the Transcom III AUX jack.

High Noise Environment N Series
The Transcom III is available in High Noise Environment versions. The "N" Series intercoms have all of the above features but incorporate special high-noise circuitry that works well in ultra-lights, helicopters, open cockpit aircraft, and with hand held radios.

Intercom Features
The Transcom III is powered by an internal 9 volt battery for operation in airplanes lacking a power socket. An auxiliary 4 foot power cable with LED power indicator is supplied for use in airplanes which have a socket. Dual PTT switch inputs, a stereo/mono switch for headsets, and volume/squelch controls are all part of this compact intercom.